I’ve just entered my fifth month overseas travelling solo. At 22 years of age, I’m just a month shy of having spent a 44th of my life on the other side of the world living out of a suitcase, having not seen my family and friends (or puppy), and sleeping in a different city every few nights.

What happened after I booked a one way ticket

For anyone who doesn’t know, I’m a full time travel blogger. I graduated university in November 2013 (with a Bachelor of International Relations & minor in political science) and a few hours before my graduation ceremony I booked a one-way ticket to London. 5 months later, here is what I have learned….

I’m stronger (mentally) than I thought

Before I left home I thought I “knew” I was strong enough to travel solo around the world for 12 months. I had previously travelled overseas by myself two years prior around Europe, as well as in 2013 to the USA, Vietnam, and Indonesia on three separate trips. But the longest of these trips was 21 days — I didn’t really know what I was getting myself into!

When I landed in London on my Qantas flight from Australia, Lorde’s Buzzcut Season was playing in my headphones and literally as soon as the plane hit the tarmac she sang the words “and I’ll never go home again”. At that moment I smiled to myself and thought it was a sign and that I was exactly where I should be (both geographically and in my life in this moment).

As it turns out, solo travel is much harder for an extended period of time. Living out of a suitcase is only fun for so long, sleeping in a different hotel bed every two nights (I review hotels) means very little sleep, and attempting to live a healthy lifestyle when you have to eat out every meal of the day is ridiculously difficult. But what’s the verdict? Well it’s been 5 months and not only am I still here, but I’m loving every minute of it.

In my fourth month I was admitted to hospital for a bad case of the flu / physical exhaustion in South Africa amidst an international conference I had flown out for. Imagine how bad I felt having flown 24 hours from Portugal to actually get there and having just travelled for 12 days around the country as a media guest, then actually getting to the conference I was there for and be lying in a bed in Emergency with an IV drip in my arm eating cut up fruit for breakfast. Not fun.

Fast forward 48 hours and I was flying back out of South Africa on a three-flight-journey to Barcelona, Spain, where I had 7 days of work scheduled. I felt like a zombie getting on that plane with 5 medications to take at 9 times throughout the day, but I kept going. I learned you are as strong as you think you are (I’m also pretty stubborn)!

I was once the kind of person who couldn’t bear the cold, would be grumpy if I hadn’t had breakfast, needed enough time in the morning to feel like I looked the best version of myself, had to workout each day or I felt lazy…. the list goes on. Three words: first world problems. I had a bunch of ’em.

Recently on a group tour in my travels I realised that my fellow travel companions had nothing positive to say. They would ask each morning “how was your sleep?” and despite having 2-4 hours of interrupted sleep (I have been in the editing phase of my latest Ebook working round the clock), I would always give the answer of “fine, and you?” with a smile and bloodshot eyes drooping down below my chin. I soon noticed that all I would ever get in response was complaints – the wi-fi wasn’t fast enough, the people next door were talking loudly, the heater was difficult to operate…. and so on and so forth.

I started thinking to myself…. yeah, my wi-fi doesn’t work at all. My heater has a mind of it’s own. I could hear the person next door brushing their teeth, the walls were that thin. But so what? I’m in a foreign country experiencing life on the other side of the world and I get paid to do this job…. no amount of trivial problems could bother me in the slightest.

Ever wondered why I always wear a hat? That’s because I don’t bother to do my hair anymore. In fact, I can’t remember the last time I used my GHD that I packed when I left home — from memory that would be months ago on a night out in Serbia.

I’ve met a lot of people on my travels and the ones that stand out to me have been those with a good heart, an inspiring outlook on life, or a story to tell that makes me look up to them and their courage. I don’t remember what they were wearing, how amazing their hair was, etc. Actually to be quite honest they all stick in my mind as physically beautiful, but it comes from my fond memories of them as a person, not because of their exterior. 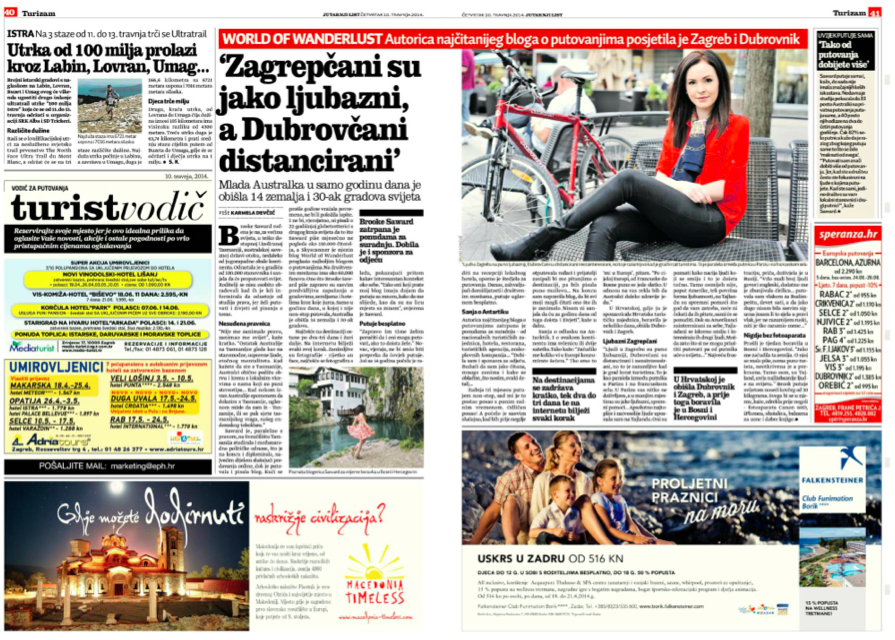 “People know me” in Croatia

Before you think I have a big head, “people know me” is an Anchorman quote!

One of the coolest things this year has been meeting people in the street who approach me and say “Are you World of Wanderlust?” Why yes, I am! The first time this happened was actually last year, but it happens a lot more now and it means I get to talk to people who find what I do/am doing inspirational – and that is the whole point! There have even been a few interviews for newspapers and magazines, I’d love to know what this Croatian article translates to…. hopefully all good things!

As a 22 year old, I’m no stranger to the odd foot tapping or watch monitoring when something takes a little longer than it should. Gen X and Gen Yers are used to having everything in an instant and if for some reason we experience otherwise – we tend to get a bit snappy. Oh but no more! I have waited 30 minutes for a coffee in a cafe where no one else was sitting, 2 hours in line to enter an attraction, and 5 months for any of my friends from home to come good on their promise to ‘come over and travel with me’ (and I should imagine I will make it home before any of them come to meet me).

I despise anyone who is Nationalistic in an offensive manner

Another recent realisation was how much I cannot stand people who are stuck in another lifetime in the sense of Nationhood. I was standing at a lookout point viewing a castle in Scotland when this really hit me. I was having a (private) conversation with an American lady about where I had been over the past few months and how great it was to have my job and my lifestyle. She soon suggested that I had a very interesting accent that was neither Australian nor British, somewhere in between. Prior to this I had been told I sounded like Kylie Minogue – part Aussie, part British (an obvious result of being Australian and living in Europe and the UK for an extended period of time), so I smiled and said ‘yeah I get that quite a lot actually!’.

Cue obnoxious Australian man…. “You’re no Aussie mate – you don’t even sound like us!”….
UMM RUDE.

So I was left thinking about this for a while and it kind of stuck in my mind for a lot longer than it should. I started to think about my Nationality and ‘who’ or ‘what’ I considered myself to be (which I concluded is a global citizen).

Then someone commented on another person in the tour from Hong Kong and stated “she wouldn’t understand, it’s her Nationality”. It was at this point I felt really disheartened and offended by the comment even though it wasn’t directed at me. What is wrong with people that they can be so rude, attach stereotypes, and judge people based on their Nationality? 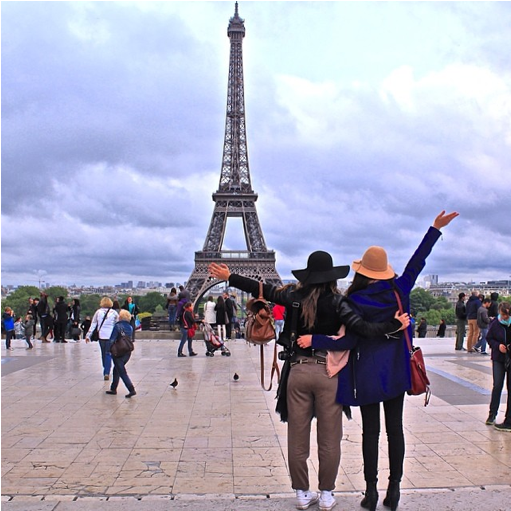 Introducing Emma – my 2014 friend from London whom I met…..wait for it….. on the interwebs!

It’s crazy to think I have a better friendship with someone I met last year online and met up with a few times this year whilst on my travels, than I do with friends I have had for a lifetime. But to be honest she’s pretty rad… so I think she’s probably an exception to the rule.

I’ve also made some great friends in Stef (London), Shernae (London), and Jasmina (Copenhagen), whom I talk to regularly. These girls are just a few of the amazing people I have met this year – the more the merrier!

I’m terrible at keeping in contact with back home

“You haven’t Skyped us for 4 weeks, luckily we know you’re alive from your blog”……… wow. I have never felt so guilty in my life! Luckily my parents are understanding…. but my sister who chose me as her bridesmaid not so much. My parents reminded me that it is important to keep on top of communication with back home so no one feels unimportant (they are all very important) or ignored. The reality is that I wake up 6-7am in the morning and charge through the day, return home to my hotel for dinner, and do work on my laptop until I pass out (usually spooning my laptop). I know I know, there’s no excuse…. but it can be difficult to find the time!

Be kind whenever possible (it is always possible)

I feel as though I should leave this as it is, the heading says it all. Please, if you take one thing from this post, never forget to always be kind. You never know how much someone might need your kindness for that day or what is going on in their life. Always give more than you receive, the world needs more of this.

Dancing in the street with your headphones on will not only make your day, it will also make someone else’s

I recently got my hands on a pair of Frends headphones and haven’t taken them off since. Over the last five months I have really just stopped caring what anyone thinks of me and going ahead and acting like an idiot for the sake of my own happiness, without regard for what anyone else thinks. I often find myself having a dance in public (I recently purchase Beyonce’s new album) and will turn around to see a workman laughing his head off at my moves. Well I’m glad you can laugh at my expense!

I still haven’t found my prince charming, but I also stopped looking

Oh if only it were like the movies. I often used to joke about coming over to Europe and finding my Prince – any Prince – not actually a royal Prince – but just a guy in general. Five months later and no Prince. I’m sure he’s out there wrestling dragons or something…. I’ll run into him somewhere, someday, and the rest will be history.