Alfama is Lisbon’s oldest neighbourhood, its most traditional and charming. One of the only districts to be spared from the devastating earthquake of 1755, Alfama is the historic soul of Lisbon and its steep, cobblestoned lanes stand just as they were in medieval times. When the WOW Team visited Lisbon recently, we headed directly to Alfama to explore the heart of Lisbon and to kick off our trip the right way! Here’s our guide on the very best that this charming neighbourhood has to offer. 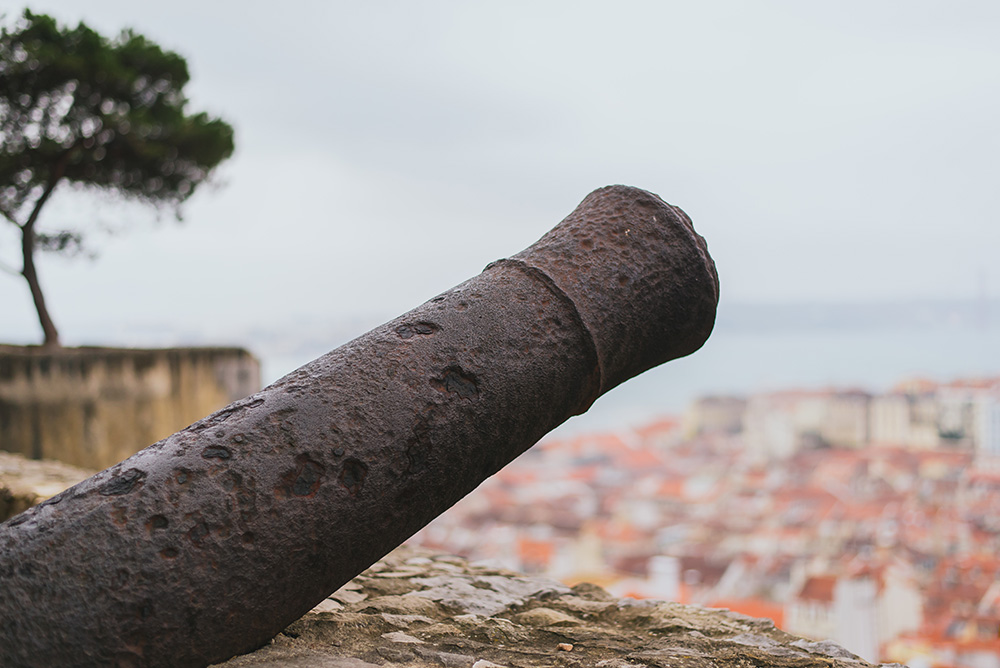 Alfama’s castle can be seen from almost anywhere in Lisbon and is one of the city’s most popular tourist attractions. Visitors can climb the towers or wander along the ramparts for some of the most breathtaking views across the city, the river and on clear days, the distant Atlantic Ocean. 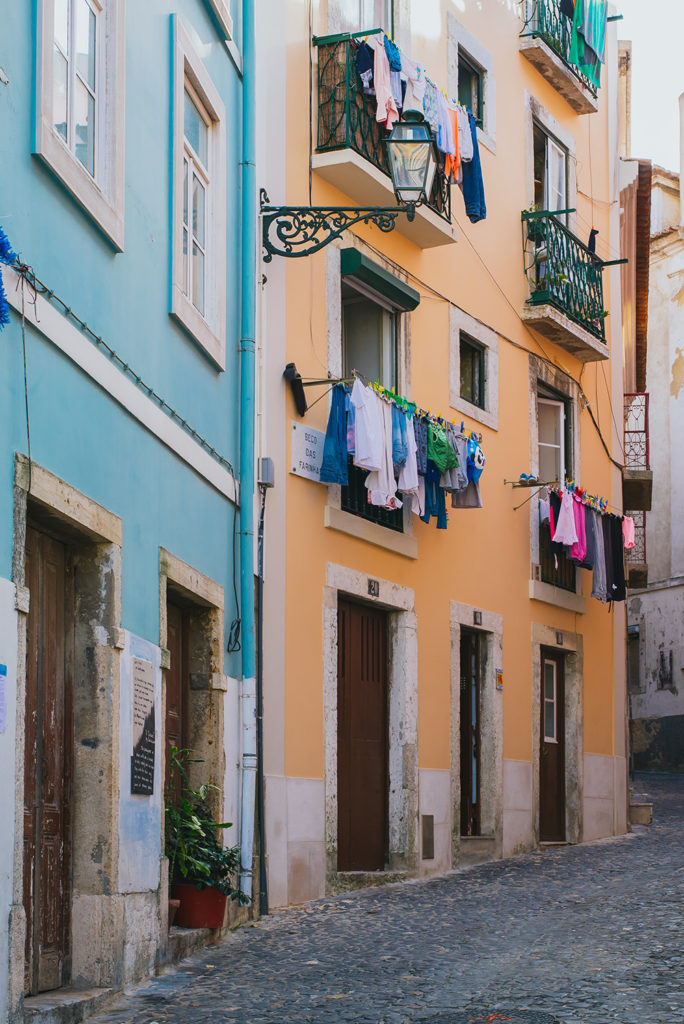 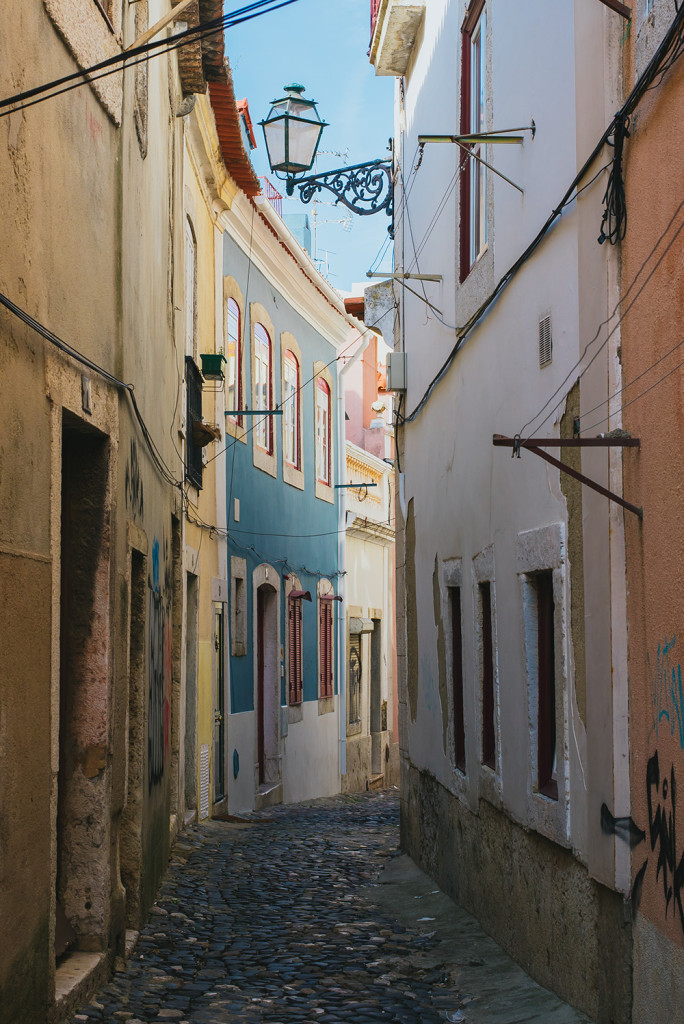 Get lost in the steep, cobblestoned lanes

Exploring Alfama’s maze of tiny streets, cobblestoned lanes and steep staircases feels as though you’ve stepped back in time. The winding, rabbit warren of alleyways lined with intricately tiled houses with wrought iron balconies, hanging washing and colourful, peeling paint reinforces the feeling that this is a living, breathing district and not one falsely constructed for tourists. Leave your map at the hotel and get wonderfully lost in these streets for a few hours. 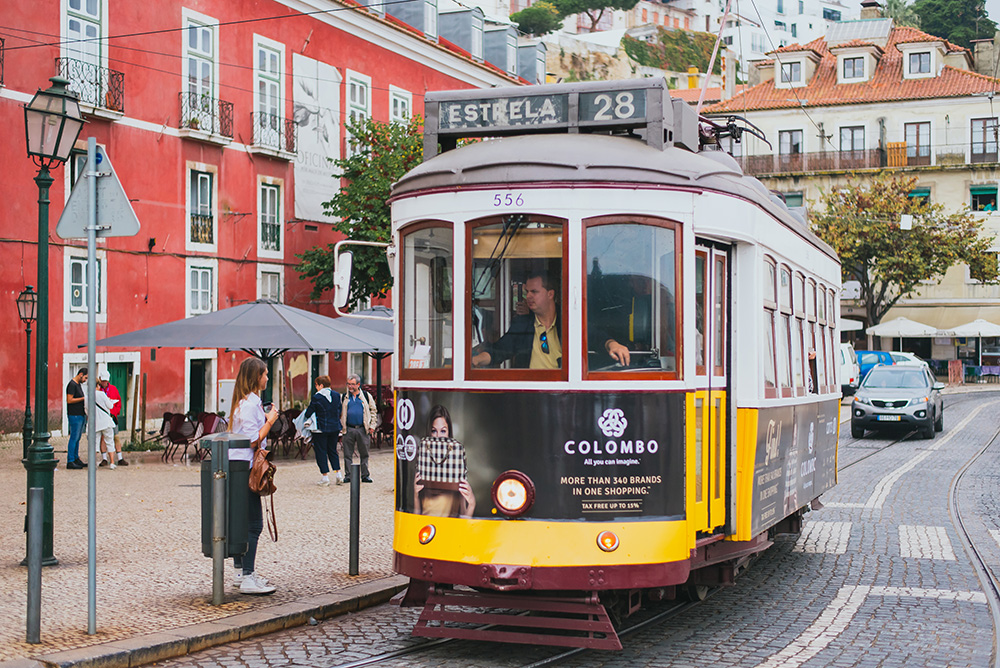 One of the highlights of any visit to Alfama is to ride the famous number 28 tram. This narrow, yellow tram has become an icon of Lisbon as it winds its way through the tiny, steep streets. You won’t find trams like these anywhere else in the world – they’re still the original models that were commissioned back in the 1930s. The tram route is long, but the Alfama section is the most enjoyable.

The romantic terrace of the Miradouro de Santa Luzia offers sweeping views over Alfama and the Tagus River. Find a spot and sit for a little while admiring the cascading bougainvillea, the chipped tiles and the stunning vista below. 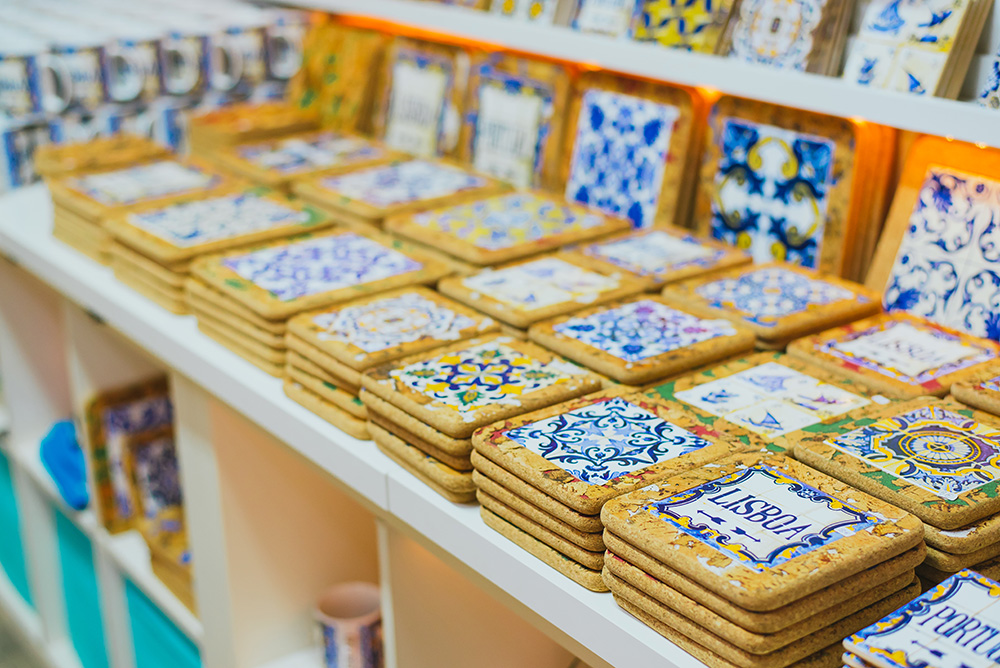 Bring your wallet so you can browse the traditional shops selling all manner of beautiful prints, tiles and crafts. If you’re in town on a Tuesday or Saturday, be sure to visit the famous Feira da Ladra flea market for an eclectic mix of item and the best place to pick up Portuguese baskets. 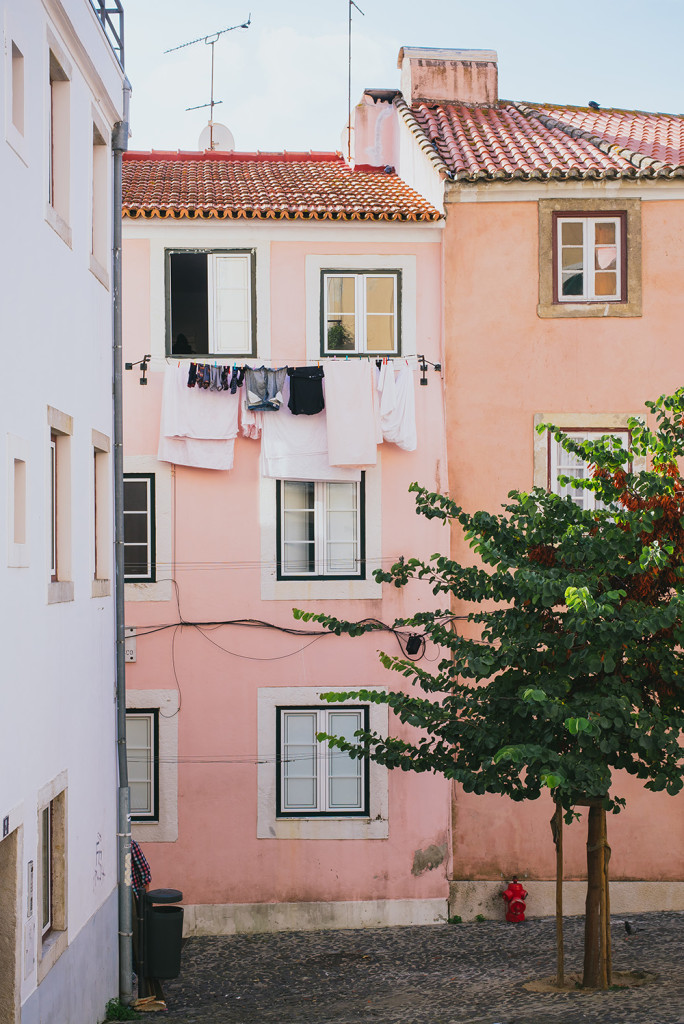 Alfama is Lisbon’s most colourful neighbourhood and a feast for the eyes. The brightly pained, albeit weathered houses, the pretty flowers bursting from balconies and the impressive tiling that decorates almost every inch of the district will fill your camera’s memory card in no time! 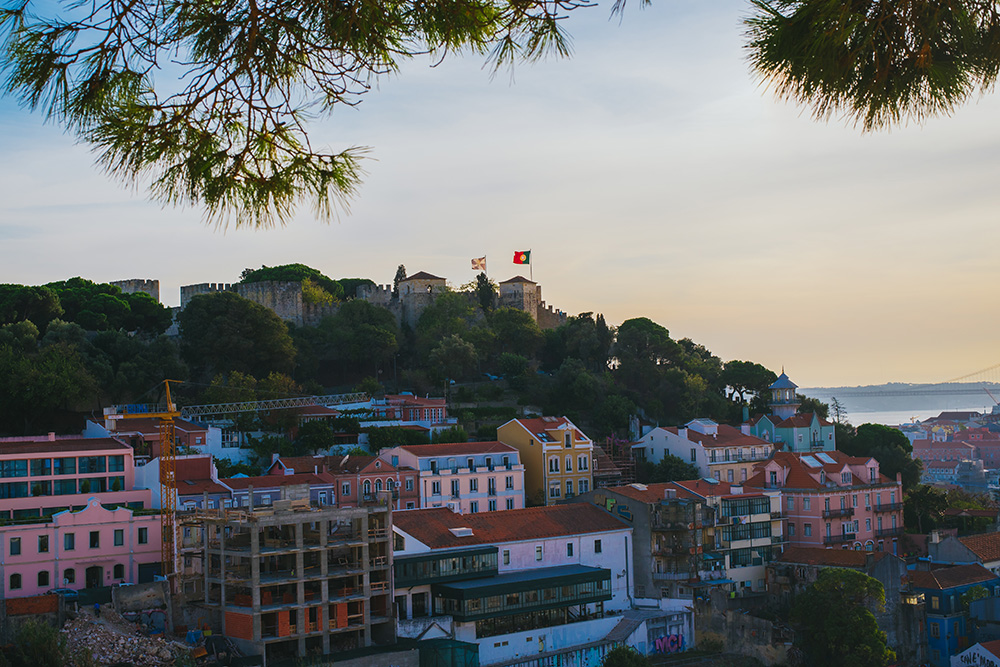 High up on the hill is the residential Graça district and another of Lisbon’s beautiful viewpoints: Miradouro de Graça. This is a favourite spot amongst locals because of its splendid terrace and panoramic views over Lisbon as well as Castelo de São Jorge. It’s much more peaceful than Miradouro de Santa Luzia. Have a drink at the open air café in the late afternoon. 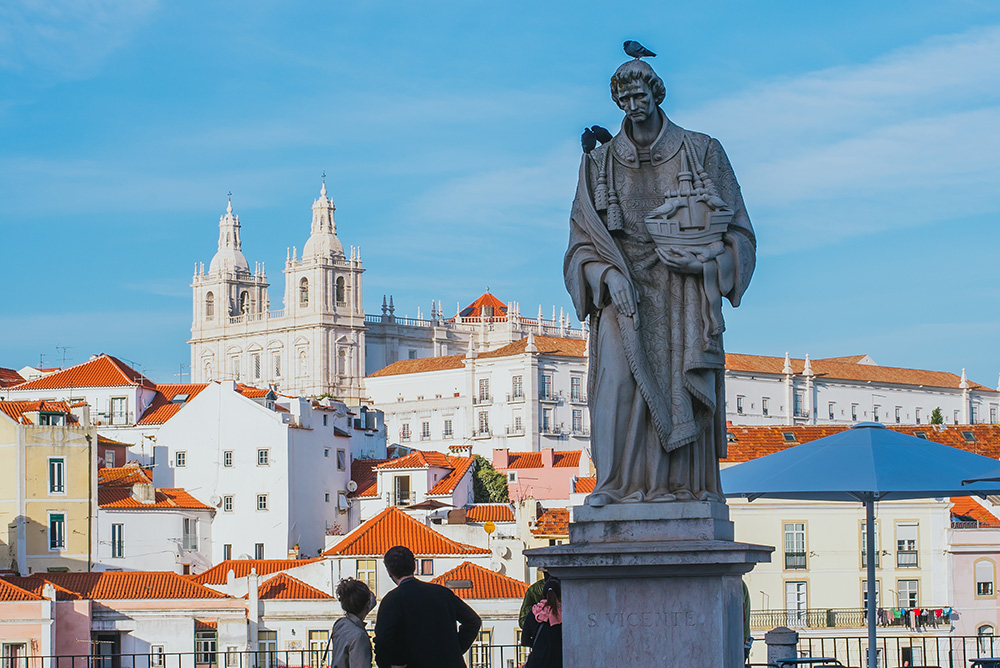 Alfama is also home to some spectacular and significant churches and cathedrals. Be sure to stop in at the Romanesque Sé Cathedral with its twin castellated bell towers, the Igreja de Santa Engrácia-Panteão Nacional, one of the most recognisable buildings in the Alfama skyline, and the Igreja de São Vicente de Fora, admired for its spectacular Baroque canopy over the alter. 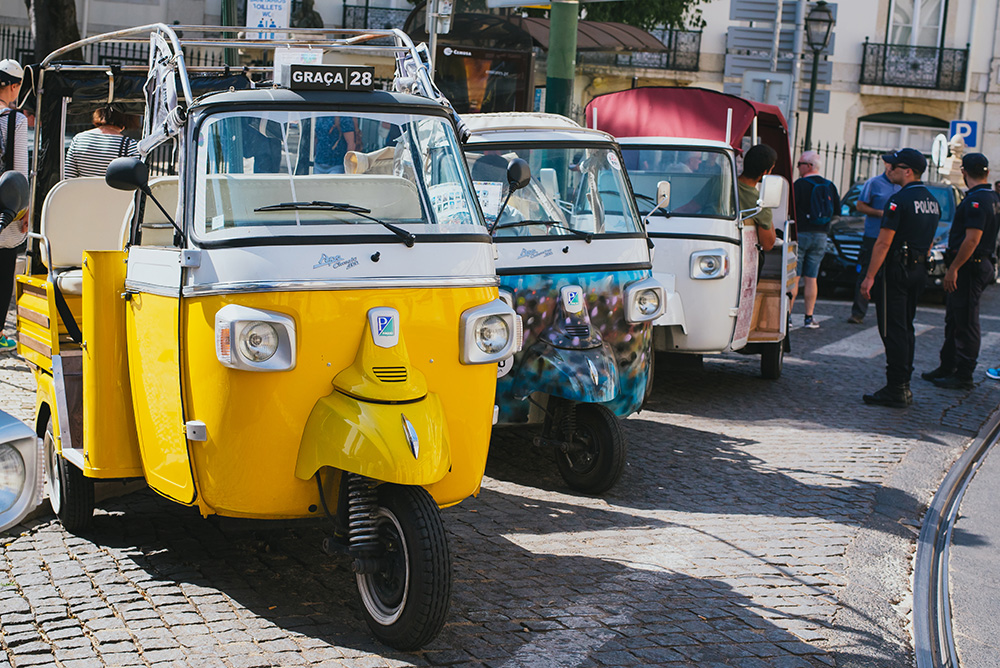 How to get around

Because Alfama is a maze of steep hills and narrow lanes, transport options are limited. The best way to get around this neighbourhood is on your own two feet of course. A popular walking route is to follow the tram route from Baixa to Miradouro de Santa Luzia. Another favourite route is to exit from the Santa Apolónia metro station and climb the steep streets up to the castle. Be sure to take the number 28 tram at least once as well.

Another unique way to get around Alfama is by tuk tuk! Asia isn’t the only place you can zip around in these three-wheeled auto rickshaws. Tuks tuks are perfect for navigating the narrow, undulating streets and make for an exciting and fun way to experience the city. 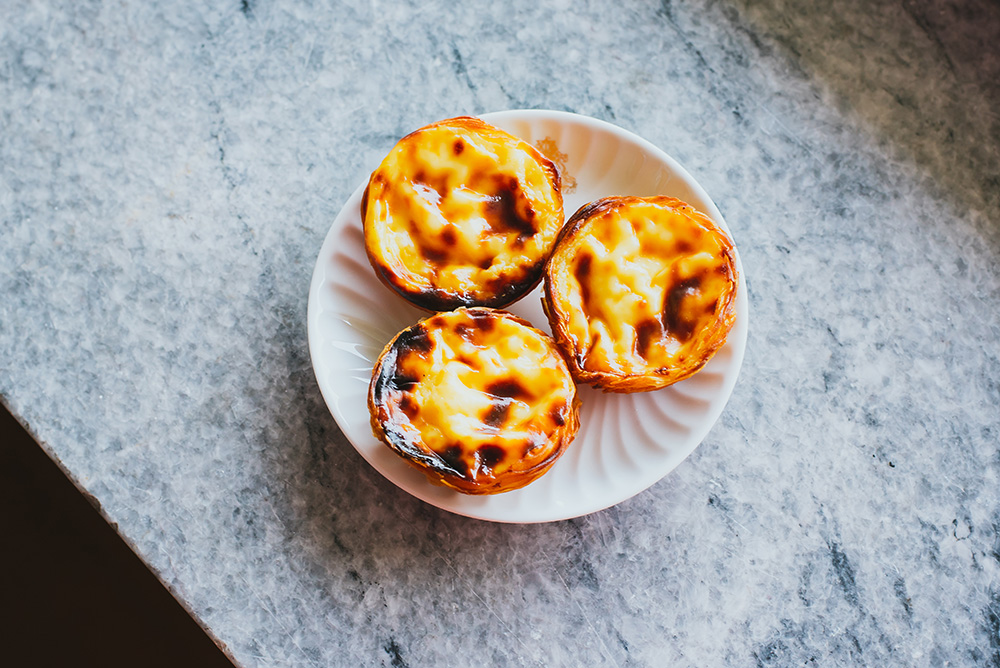 Lisbon is a foodie’s delight and you can’t come to Portugal’s capital without sampling the following dishes, many of which can be found in Alfama: bacalhau (the Portuguese national dish of salt cod), caldo verde (a green soup made with cabbage, onions, potatoes and chourico sausage), carne de porco Alentejana (Portugal’s version of surf and turf featuring pork and clams), queijo de serra (a creamy sheep’s milk cheese), and of course the famous pasteis de nata (custard tarts), which can be found all over the city!

If you’re looking for a central Alfama hotel with a focus on good design, the Memmo Alfama is the place to stay. Located in the heart of the neighbourhood and only steps away from the Sé Catheral and Castelo de São Jorge, the Memmo Alfama is already considered one of Lisbon’s finest hotels and is also the first boutique hotel in the city’s historic quarter. The wine terrace and rooftop pool offer some of the best views over Alfama. Its contemporary feel, minimalist design and high standards make it a great base for your stay in Alfama.

Have you been to Alfama in Lisbon? What did you love about it?

A Guide to Jersey: Everything you Must See and Do in Jersey
Checking in: Luxury in the Algarve at Vila Vita Parc